I know it's just the first full week of 2009, but Animal Collective just released what might prove to be the best album of the year. Merriweather Post Pavillion really is as incredible as the cool kids say it is. Even if you've never liked them before, at least give it a listen. I can't stop listening to it. Try "My Girls". If you aren't shakin' your groove thing even a little by the end, then you have no soul.

On a somewhat related note, I've decided that my next band, after Unicorn Glüe Factory, will be called The Roses of St. Olaf. Get it?!!?

Things that were awesome about 2008:

I survived another Black Friday.

No one got killed at my store.

We saw Twilight last night. Iron & Wine just made a shitload of money.

I can't wait for Christmas. The gift-giving is shaping up nicely, and so is the presentation.

My Christmas cards are going to be awesome.

I miss people I like a bunch. The internet has been awesome for making friends from all over. Along with that comes the fact that you don't get to see those people enough. Not even close.

That being said, this is a shout-out to my homies, near and far. Ya'll still my bitches. Keep it sleazy.

My boyfriend has a craigslist stalker.

In case you were wondering, having the stomach flu is nothing like spending an afternoon playing with puppies in a magic valley filled with leaves made of cashmere.

It's more like an invisible scaly claw is constantly reaching inside your stomach and endlessly twisting your intestines into painful pretzels.

Paul Smith scarves, while gorgeous and lovely, are entirely too short. Also, I wish I could have justified purchasing the electric blue Balenciaga scarf. It was long and soft and radiated the same comfort that my grandmother used to when she handed me a piece of hard candy and said, "Don't tell your mother."

whereispaco. My love for John Varvatos is enduring, but some of his shit is too fucking gay and will someone out in LA please beat down Christian Audigier. Ed Hardy is just awful.

Those are my fashion rants. There's more I'm sure but these were the tops.

Fred had fun and got to meet some of my peeps. Saturday night we saw Project Runway winner Jay McCarroll out and about. Apparently he has some documentary coming out that he worked on and it was premiering at the Chicago Gay and Lesbian Film Festival. That doesn't excuse his hair. I'm sure he's great and funny and a thrill to be around but when I was in close proximity to him, peeing was a much higher priority than blowing smoke up his ass.

We drove home late last night but not without stopping at numerous truck stops to admire the quality craftmanship that goes into making dreamcatchers with a portrait of Jesus in the center. Remote, rural areas scare me sometimes.

The temperature is dropping in mid-Ohio and it feels like fall. At least for a week or so until, I'm told, we fast forward to winter. It's cold and stuff and going outside with the dog in the morning is a daunting but necessary task each morning.

My parents were here this past weekend. I was determined that they wouldn't wear me out like usual, but instead we played it cool, taking our time walking around the neighborhood and just enjoying each other's company. I had to restock on candles from Paul Robinett and found a new one that's just dandy: Pipe Tobacco. It smells like my grandpa.

Daisy is still awesome, though she's in quarantine right now due to a slight limp that won't go away. We're doping her up on painkillers to make her chill out. Not playing in the backyard with her BFF Mia is killing her, but tough love is sometimes the only option. Fred and I fell asleep on the floor watching Baby Mama last night while Daisy hogged every bit of space she could between us. It was incredible.

The remaining days before holiday insanity at work are swiftly ticking by. I worked over 50 hours last week moving merchandise and unpacking boxes and trying to get everything done at once. I survived but it wasn't easy. Once everything is set and in place, we'll be good to go and the philosophy "Stack'em high and let'em fly" will firmly be in place. Getting to that point though is a lot of hard work.

I've got a couple more weekends off before the mandatory 6-day work week starts. One of those is Halloween. The other is a three day mini-vacation in the middle of November just before the season truly kicks off. Fred and I have decided to go to Chicago. It's been so long since I've visited and this is the last chance I'll get before 2009. I can't wait. If Daisy didn't vomit every time she got in the car she'd come with us, but she does so she's not.

I've made a decision. I do not like Marnie Stern's music. To most people that will not be relevant. To others I probably lose some cool points, but it's annoying and crappy noise that I just don't get. On the other hand, I do like Fuck Buttons and Flying Lotus and we're going to see Fucked Up tonight. Fred wants to hug the lead singer. I'm shooting higher. I want to make out with him. 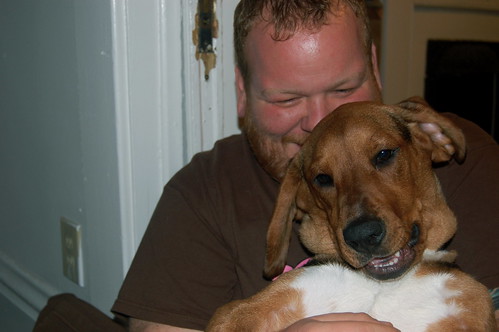 Fred and I were discussing the most uncomfortable overhead announcement possible at a pharmacy or grocery. This is the result:

"Can I get a price check on a RID Complete Elimination Kit, a double pack of Fleet enemas, 2 packs of Trojan condoms, the red ones, and an Ortega Taco Dinner Kit?"

I've been in my new position at work for three weeks now. It's been an overwhelming experience at times, stressful and complicated and I took over the department during a time of massive transition, only adding the intensity I expected. Overall I'm still excited but there are moments when I feel completely inadequate.

My desk is a mound of printed out e-mails, reports, training alerts, and scratch pieces of receipt paper with notes to myself. I've had no chance to actually organize my things in there and a retail manager in the office is not a good retail manager. In reality, the only opportunity to make my desk look more like a desk and less like a garbage dump is to go in on my day off. I'm not opposed to doing that except right now I don't really want to. I'm all for putting in the extra time to get things done, but I kind of think three 11-hour days in a row last week was sufficient. Also, after tomorrow I won't be in the store again until next Monday. I'm not off work, just won't be working in my store so the growing pile of dead tress will probably exist even longer.

The business trip I anticipated is canceled. No Atlanta. No Houston. While is was for work, I was still looking forward to just going somewhere else. I used to travel so much and I loved it, but since moving to Columbus I've only left the city once. I love it here, but I still like to get away. Unfortunately I won't receive any vacation time until February. I'm somehow trying to fit in a extended weekend where I can run away for a few days, but as the holiday season comes closer and closer into view, that idea is seeming less and less likely.

All in all life is real good and shit. Fred still kicks major ass and I'm feeling more and more like a part of the community here in the C-Bus. It's the most I've felt at home since leaving Chicago and I've only been here 7 months. I "get" the city and the city "gets" me. I don't see myself wanting to leave anytime soon. In fact, in the next year I plan on being a homeowner which is exciting and terrifyingly grown-up of me. I guess that happens as you, you know, grow up and stuff.
Collapse